Over 85 years of service to our profession

July 1930 – Brooks F. Ellis joins the faculty of the Department of Geology at New York University, bringing with him the first pages of an illustrated catalogue of the Foraminifera, on which he has been working since 1928. In 1932 he receives his PhD and services of a student assistant, Angelina R. Messina.

“In view of the fact that there are over 12,000 of the genera and species of Foraminifera ... the undertaking appeared to be an almost hopeless one. With the aid of students at the University, the compilation actually got under way.”

September 1931 – Ellis obtains the assistance of four men from the Emergency Work Bureau, and puts them on the job of preparing a bibliography of literature on Foraminifera.

“This phase of the work occupied about a year, and resulted in a card index of about 50,000 references." 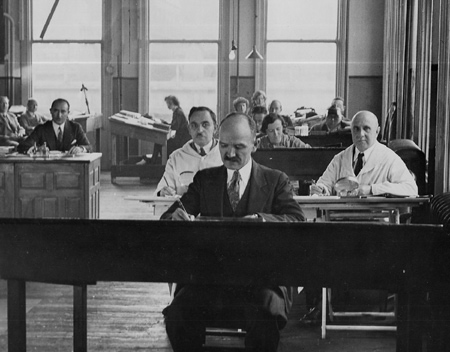 May 1933 – FDR creates the Civil Works Administration, modeled on the EWB.

September 1934 – The Project is evicted, moves to A. W. Stephens printing plant in Brooklyn. The Borough of Brooklyn provides carpenters and painters, while individuals and businesses donate furniture and materials.

“About one year more will be required to finish the first draft of the manuscript and to complete our very extensive card index. This will mean, at this time, we will have in our files between twelve and fifteen thousand descriptions of species and about 25,000 detailed illustrations. Our card index will expand to about 300,000 references.”

September 1935 – With the American Museum of Natural History as sponsor the Project, renamed the “Geologic Catalogue”, obtains a WPA grant for a term of two years, with funds for 201 employees. 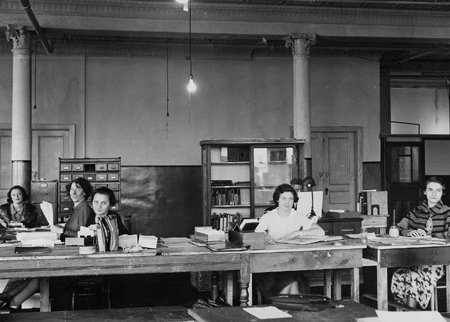 “In addition extensive equipment was purchased and funds were provided for fifty typewriters and specially built tables, as well as a modern photographic laboratory to make bound photostat copies for a library of foraminiferal literature.”

NOTE - More than 10000 bound photostat volumes of classic literature in foraminifera and ostracoda were eventually produced.

November 1935 – The Stephens building is condemned for a new approach to the Brooklyn Bridge.

After a brief but rather hectic period permission was obtained to use part of the new grant for rent. Soon thereafter a lease was signed for a portion of the seventh and all of the eighth floor at 45 West 18th Street. The [personnel] quota was reduced to 130.

December 1935 – With commercial printing for the 25-volume set estimated at $150,000 or more, Ellis arranges for the Project to use government-subsidized staff and equipment to print the Catalogues in house.

September 1940 – With the ever-growing Catalogue still unfinished after four extensions, WPA declines to continue support. AMNH creates a Department of Micropaleontology with the object of housing the Catalogue work. The “Department” is required to be entirely self-supporting; it is never granted Museum funds, and Ellis and Messina never become more than honorary curators.

May 1942 – WPA officially terminates the Project and removes all equipment. Over the next eight months Ellis and Messina and one assistant, using borrowed equipment, complete printing of the 29-volume Catalogue and send it out to more than a hundred subscribers at $100 per set. During the following lean years Ellis and Messina, working alone, edit and print a 3-volume synonymy supplement.

November 1945 – An Advisory Board is formed, including the head of US Geological Survey, president of AAPG, and several oil company chief geologists, to arrange donations that revive the Department. The first annual supplement contains more than 500 new species from the East Indies found by Dutch micropaleontologists before the war. In 1946 Ellis becomes Chairman of the NYU Geology Department, a position he holds for the next 20 years.

July 1947 – First issue of “The Micropaleontologist” newsletter. Graduate student training is initiated in 1948, and a Living Foraminifera laboratory is established under Angelina Messina in 1950.

January 1954 – The peer-reviewed journal “Micropaleontology” succeeds the newsletter. During 1954 the Department expands, adding a spore and pollen laboratory under L. R. Wilson, who was succeeded in the next year by Harold Cousminer. The Department begins taking in consulting, initially from Carter Oil Co., and by 1959 has five staffers who are employed full time in this capacity. In 1958, the last printed copy of the original 32-volume Foraminiferal catalog is sold and a microfilm edition is initiated.

The Museum takes possession of the previously independent Department, and all senior staff resign in protest, ending consulting and research programs. Tsunemasa Saito, of Lamont-Doherty Geological Observatory at Columbia University, agrees to act as part time head of renamed Micropaleontology Press, which is now supported entirely by publishing revenues.

January 1972 – With funding from the NSF, “Bibliography and Index of Micropaleontology” is launched. A festschrift for Saito’s professor Kyoshi Asano is the first in the “Micropaleontology Special Papers”.

August 1982 – “Catalogue of Diatoms” is launched with support from Shell and Chevron oil companies.

In 1986, oil companies contribute support to establish a CDROM edition of the Ellis and Messina Catalogues, which subsequently becomes the basis for the internet edition when the micropress.org website is created in 1992.

June 30, 2003 – AMNH closes Micropaleontology Press, and releases all rights and properties to The Micropaleontology Project, Inc., an independent non-profit corporation founded by the former staff of the Museum program. The Project takes offices at 256 Fifth Avenue, and begins to explore new sources of income.

September 2004 – First issue of “Stratigraphy,” a new journal in Earth sciences, in a joint subscription with Micropaleontology. In 2006 the journal is adopted as the journal of record for the North American Commission on Stratigraphic Nomenclature, in place of the AAPG Bulletin.

June 2005 – The Catalogues exceed 200 looseleaf binders, leading to the decision to shift to online publication with printed pages as an option. The Catalogue pages are re-scanned at higher resolution to meet this new need.

September 2009 – The Project moves into space provided by Queens College of CUNY (City University of New York), to continue as an independent nonprofit publisher in association with the College.

July 2016, the sister organization “Micropress Europe” is officially opened at the AGH University of Science & Technology in Kraków Poland. The offices of MPE house a reference library, the E&M Catalogues, and microfossil collections. MPE staff assist with editorial work and the task of compiling the E+M Catalogue of Foraminifera.

Micropaleontology is the study of microscopic fossils. It is the largest discipline in paleontology, just as microfossils are by far the most abundant of all fossils. Although nearly invisible, micro-organisms at the base of the food chain make up nearly 90 per cent of the biomass in oceans and lakes. The variety of life forms at this level is almost incomprehensible, and while only a few kinds leave solid remains that fossilize, even these few can be so abundant that in places they form mountains of pure fossil remains. The limestone of the plateau from which the Sphinx and Pyramids are carved is actually a mass of foraminifera (left, in a microscopic view), preserved in a vast offshore formation that, 40 million years ago, extended from France to Burma. The Chalk Cliffs of Dover, another microfossil marvel, is a layer hundreds of feet thick all across western Europe that consists of nothing but sub-microscopic coccoliths (see below). In other parts of the world, solidly packed remains of diatoms (see below) make up formations of thin-layered diatomite hundreds of feet thick that are quarried for industrial uses.

The abyssal floor of the ocean, which occupies more than half of the earth's surface, is buried under a carpet of microfossils that slowly piles up like layers of dust over the millenia. Changes in the abundance and types of microfossils from year to year, over millions of years of undisturbed accumulation, makes an exquisitely detailed record of climate change, plate tectonics, and biological evolution. Each time a new species of free-floating marine micro-organism (such as the dinoflagellate, right) evolves, it quickly spreads throughout the oceans in countless billions, forming a worldwide marker in the fossil record. Such marker horizons allow geological events in different parts of the world to be related in a global earth history. For instance,it was the microfossil "tape recorder" that proved that reversals of the polarity of the earth's magnetism were worldwide events. Microfossil data also revealed that changes in sea levels, temperature, and glacial advances were synchronous worldwide, proving the reality of global climate changes more accurately than geochemical dating methods.Recently, micropaleontology has shown how oscillations in the earth's orbit and tilt lead to cycles in global climate, including the Ice Ages.

Microfossils are vital to oil exploration. Because of their tiny size and great abundance, they occur unbroken in the rock fragments brought up by drilling into the deeply buried ocean formations and lake beds where oil is found. By comparing the characteristic fossils from each formation as they are penetrated by the exploratory drills, geologists can unravel the geometry of the strata far beneath the surface and locate the domes and traps that may hold oil. The condition of the fossils, as well, indicates whether the petroleum source rocks have been buried and heated sufficiently to generate oil from trapped organic matter. Most importantly of all, the organic matter itself is almost entirely from ancient micro-organisms that make up the ocean's biomass. (Diatoms, as at left, are important trace fossils as well as the primary source of oil.)

Most of the principal microfossil groups are Protista. These are single-celled or colonial Eukaryotes (i.e. organisms with cell nuclei and chromosomes), that are more advanced than Prokaryotes (archaea and bacteria), while being ancestral to higher eukaryotes such as fungus, plants and animals. The foraminifera and radiolaria are two orders of predatory (i.e., non-vegetative) protists, related to amoeba in the Sarcodina, that secrete multi-chambered limy and siliceous shells, respectively.

Vegetative (photosynthesizing) protists with fossilizing hard parts include coccoliths, with complex structures (as in the coccolith at the right, and on our splash panel ) that break down into submicroscopic but readily identifiable limy disks and stars, and the diatoms, with single-chambered circular or ovoid valves of silica that fit together like pillboxes. The dinoflagellates and their extinct relatives acritarchs, with whip-like propulsive flagella and chitinous body casing, are both predatory and photosynthesizing; they are represented in the fossil record by the cysts that they make during one part of their life cycle.

Important groups of microfossils are also found among animals and plants, for instance the ostracodes, tiny free-swimming crustaceans in the same family as barnacles. Spores and pollen from fungi and plants give important paleonvironmental data. In ancient strata conodonts, the teeth of an extinct group of soft-bodied invertebrates, are important stratigraphical guides, and icthyoliths, or fish teeth, are used for deep-sea dating.